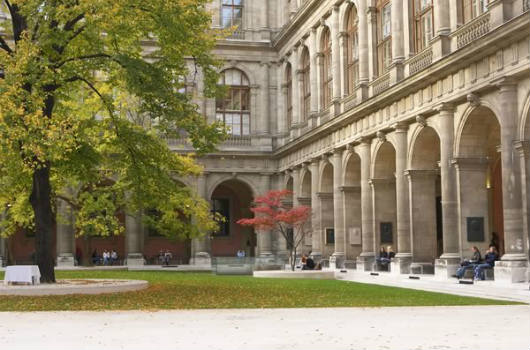 With more than 10.000 students, the Law school from Vienna (Juridicum) is one of the leading universities in Europe. Every year, more than 2.500 students walk through its gates looking towards a bright future that awaits them. Though, what is the selection process, when are the exam sessions, how does the study program and the structure of the academic year look like and how do foreign students deal with the usage of German language?

Those issues and many others, like finance and free time activities, are going to be tackled in this article, in order to give students an overview on how life as a law student at the University of Vienna looks like.

The University of Vienna is very selective when it comes to its students and functions on the principle Everybody is allowed in, only few may stay. This is not meant to discourage students, rather to give them the opportunity to prove themselves and to show that they are capable of walking on this hard but beautiful path towards success. There is no admission exam, the only thing required is a high school degree. During the first semester the students are being introduced to the science of Law Philosophy, Public and Private Law. When they are ready, they are being required to take an exam from those subjects, which is called ‘Modulprüfung Einführung in die Rechtswissenschaften und Ihre Methoden’, or briefly, StEOP Einführung (nothing more than a junior prom for the ambitious ones, like you).

A praiseworthy thing about the University of Vienna is that nobody schedules the exams. The University of Vienna gives students absolute freedom in organising their study program and planning their exams. There are five exam session per year, namely, in January, April, June, October and November. During those sessions, students may take the exam for which they have prepared for a couple of months.  This is a considerable advantage for any student. No problems regarding the lack of time for preparation are to be feared.

However, prudence is advised. Even if students can study for as many years as they want, employers tend to choose people who finished law school in about four to five years, simply because it is a clue that the candidate was disciplined and hard working. Of course, in situations where students have to finance themselves through a job, the employers will be understanding and even if it takes them longer to finish their studies, they may see this as a positive feature of the candidate because it means he or she has organisational talent: ’You managed to work and study law? Well, that is impressive’. Having a job is, therefore, a good excuse to study for more than five years.

Another question one may have regarding the study program would be about the structure of the academic years. One thing needs to be noted: there is no academic year. There are three modules: the introduction module, the judicial module, and a third module, which regards political science. In the first module, students are introduced in the science of Private, Public, Roman, (optionally) Criminal, International and European Law and also Latin. There are certain exams students have to pass in order to reach the second module. But even if you managed to pass the STEOP-exam, you can praise yourself, because you have already gotten far. In the second module students go deeper into Private and potentially Criminal Law and discover the Labour, Civil Procedure and Corporate Law. In the third module you learn more about International and European Law and you will start with Constitutional and Tax Law.  Students must also do a couple of optional disciplines, from whatever field they choose to, in order to reach a certain number of ECTS. The ECTS is an abbreviation for ‘European Credit Transfer System’ which develops a measurement for the hours spend pro semester for a particular subject. We call this module ‘Wahlfachmodul’ which would translate in ‘module of optional subjects’. These subjects will be your specialization. Students who managed to go through all the modules have a ‘magister juris’-title.

At this point many of them, including you, may consider doing a masters. However, great news for everybody: there is no masters degree! The master is practically included in the study program, hence the reason why it is so voluminous. However, for the ones eager to get another title and more knowledge there is the option of a doctorate and for those who have or had good grades there are also scholarship opportunities. In addition, students also have the opportunity to do an LL.M, which is a master exclusively held in English, also available to students who studied law in other countries than Austria.

At this point one may ask himself/herself, hearing all the praiseworthy things about the Law School of Vienna, how he or she will deal with the usage of the German language. As a foreign student, the candidate needs to have a German level of at least B2. The University of Vienna offers German courses special for foreign students for about 200 € per module. You also have to bring a certificate which is recognised by the University of Vienna, for instance DSD II, DSH.

Last but not least, we have to discuss a hot topic: FINANCE. The study fees required by the University of Vienna do not overcome 19 Euros. The first fourteen semesters are therefore, almost for free. Those rules apply for students from the European Union and who carry on a diploma program. Students also benefit from a couple of tariff reductions. The first thing a student should do when coming to Vienna is open a bank account, which is free for the whole study period, but usually under the condition of not reaching the age of twenty-seven during it (which is also not desirable taking into consideration that you want your career to be ‘tip-top’ by then). An amount between 250 and 400 € is going to be spend on rent, approximately 70 € per semester for public transportation (which are of a very good quality and thus worth all the money), 100 € for food, and between 50 to 100 € for books, which you can also borrow from the library for a whole semester.

For students who are looking to spend some quality time, during their study period, Vienna has everything they need. From clubs to museums, restaurants where you are being served the traditional ‘Wiener Schnitzel’, bars, beach clubs for the summer, concerts, parks, youth programs etc. The City of Vienna also organises ‘The Long Night of Museums’ when one can enter museums for a very cheap price and even for free.

With this article I hope to have given you an overview about how the life as a student at the Vienna Law School looks like. Vienna is a great place for students with high potential who look for new opportunities to build up their careers. Not only that it gives you the chance to get in touch with firms and corporations, or to develop yourself as a self-employer on a flourishing business market,  but it also puts you in a place where the people who need you can and do search for you on different fairs and exhibitions, which we call ‘Messen’. Juridicum gives you the opportunity to become a lawyer, a jurist, a notary, a tax adviser, or a consultant, and usually those who take it, never regret it.