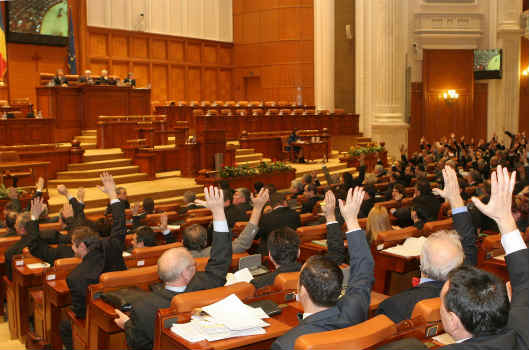 Once regarded as an important part of the European tradition and a protector of democracy, nowadays, the concept of 'parliamentary immunity' faces harsh criticism for failing to reach its main purposes, facilitating abuses and protecting corruption.

The aim of this article is to examine how parliamentary immunity works, while also providing a glimpse into the controversial and debated aspects regarding this issue in Romania. Lately, this subject has received a lot of attention from both members of the Parliament and citizens alike, and it is viewed as a rising problem in the context of corruption and abuse of power (Caian G, 2009).

The concept of parliamentary immunity depicts a procedure that applies to members of the Parliament, which consists in a partial protection against criminal or civil rules applicable to regular citizens. Traditionally, immunity is divided into two main concepts: non-liability and inviolability (Maria Crespo Allen, 1999). Non-liability refers to protection against repercussions regarding any votes, opinions or decisions made in the exercise of parliamentary duties. Inviolability, on the other hand, meaning immunity in the strict sense, is the protection against arrest, detention or prosecution, unless the consent of the Chamber to which the member accused of breaking the law belongs is expressed.

The rise of political parties in democratic states required a wider protection for those who were chosen to represent citizens’ interests, so that independence and freedom of opinion would be guaranteed. Its main purpose was to avoid that elected representatives be pressured by the threat of prosecution for their actions and decisions, in order to freely express their beliefs and take independent decisions (Wigley S, 2009). Although immunity prohibits that members of the Parliament be held responsible for their actions and duties as parliamentarians, they can however be held responsible for their actions as private citizens, although with some limitations. As a consequence, members of the Parliament cannot be detained, searched, arrested or indicated for any offences until after their immunity is removed, with the exception of flagrant crimes. In Romania, immunity is guaranteed by the Constitution and can be removed only after the members of the Chamber to which the member of the Parliament belongs give their consent, after hearing that member. Therefore, it constitutes a wider system of parliamentary immunity, one that offers an extended protection, also known as the ‘French model’. While most countries adopted the French Model, a number of states, usually where there is a common law system, use the ‘Anglo Saxon model’ of immunity, which offers a weaker protection, usually consisting only in freedom of opinion (Venice Commission, 2014).

Although parliamentary immunity is meant to reassure the protected position held by members of the Parliament in a state, in some legal and political systems it is viewed as an easy way to obstruct the law. As a consequence, due to an increase in corruption crimes committed by high officials (Transparency International, and Global Integrity Reports), citizens have lost confidence in their chosen representatives and in the values promoted by democracy (Transparency International Research, Corruption Perceptions Index).

In Romania, parliamentary immunity is a highly controversial subject, especially in the light of recent events. There have been a series of requests to remove immunity for some members of the Parliament accused of acts of corruption to which the votes were negative, thus restricting prosecutors from holding them accountable for their crimes. The main problem is that the lack of transparency and groundless decisions have created a favorable environment for high level corruption, and that has caused an unprecedented lack of confidence in the eyes of the regular citizen in the state’s representatives. While recent changes in legal procedures regarding parliamentary immunity have made it even harder to guarantee a fair trial, the main problem remains how these rules are applied. The European Convention of Human Rights does not regulate strict rules regarding parliamentary immunity (Resolution 97 (10) by the Committee of Ministers, Twenty Guiding Principles for the Fight Against Corruption) therefore it is up to each state as to how it chooses to protect its representatives, as long as there are no conflicts with the rights protected by the Convention. As a consequence, many believe that immunity is no longer a protector of democracy, but a personal privilege given to those who are already in a position of power, and that obstructs the fight against corruption (Lane C, 2007).

The main argument against parliamentary immunity is the lack of fixed criteria to follow by representatives of the legislative power when voting against or in favor of maintaining one’s immunity `(Venice Commission, 2014). This is believed to be an important factor for the decreased public confidence in elected representatives, mainly because it leads to abusive decisions. Evaluations done by GREGO showed that people who have committed crimes took shelter behind their parliamentary status. While it is normal that members of the Parliament benefit from a more extended form of protection than regular citizens, this should not prevent the normal course of justice. In other words, justice should be equally served.

Also, another disadvantage is that parliamentary protection tends to be granted to members of the ruling majority, while under protecting members of the minority (Lane C, 2007).

On March 13, 2015, public prosecutors formulated a request to approve the arrest of a member belonging to the Romanian Senate, Dan Șova. The charges against the ex-minster consisted in complicity to abuse of office.

The request failed to pass, after 67 of the members of the Senate voted against the proposal, and 79 voted in favor. The results of the vote were disputed, with many, including the President, arguing that the legal provisions regarding these votes were unconstitutional.

This particular case received a lot of attention from the media, and not only members of the Parliament were resentful towards this situation, but also regular citizens. Besides the issue regarding the legal procedure which aggravates judicial prosecution, the population’s frustrations increased as the number of elected representatives accused of corruption that cannot be arrested or detained due to their immunity grows every day. This resulted in protests and demands that Parliamentary immunity be removed due to the fact that it is believed to leave room for abuses and encourage corruption. Furthermore, the subject of parliamentary immunity in Romania caught the attention of international embassy officials. Although they did not comment on the Șova case, they did state that the situation is alarming and unacceptable, and that the law should apply equally to all citizens (statement available on the UK’s embassy in Romania’s website).

Furthermore, The High Council of Magistracy, the guarantor of the independence of Justice, announced in a press release that its concern is that a protective attitude towards parliamentarians who break the law may result in an obstacle for justice (statement available on the institution’s website). Moreover, it stated that immunity should not lead to obstruction of justice, and laws should apply equally to members of the Parliament and regular citizens. It further stated that, in order for a democratic system to function, it is of utmost importance that members of the legislature be responsible both politically and legally for their actions. The role of immunity is to protect the legislative process, and not the individual legislative member, therefore when this goal fails to succeed, law reforms regarding political immunities should be seriously considered. For example, in countries such as the Czech Republic, Lithuania or Slovak Republic, the majority of requests to lift immunity are granted (Office for Promotion of Parliamentary Democracy), due to the fact that their national system has a stricter approach on how immunity is granted, in comparison with the system we currently have in Romania.

In conclusion, having a Parliament where its representatives are guaranteed freedom of speech and freedom of opinion without fear of repercussions is meant to assure that the key principles of democracy are respected and valued. In other European states, such as the Netherlands, the UK or Ireland, members of the Parliament are offered little to no parliamentary immunity, and researches on corruption show that, in fact, these states have among the lowest perceived levels of corruption in the world (Transparency International Research). However, countries such as Romania, where immunity offers a wider protection, confront themselves with a higher number of corruption cases. In the end, the question remains: is immunity still a necessary part of a democratic society, giving its many ways in which it is being misused?